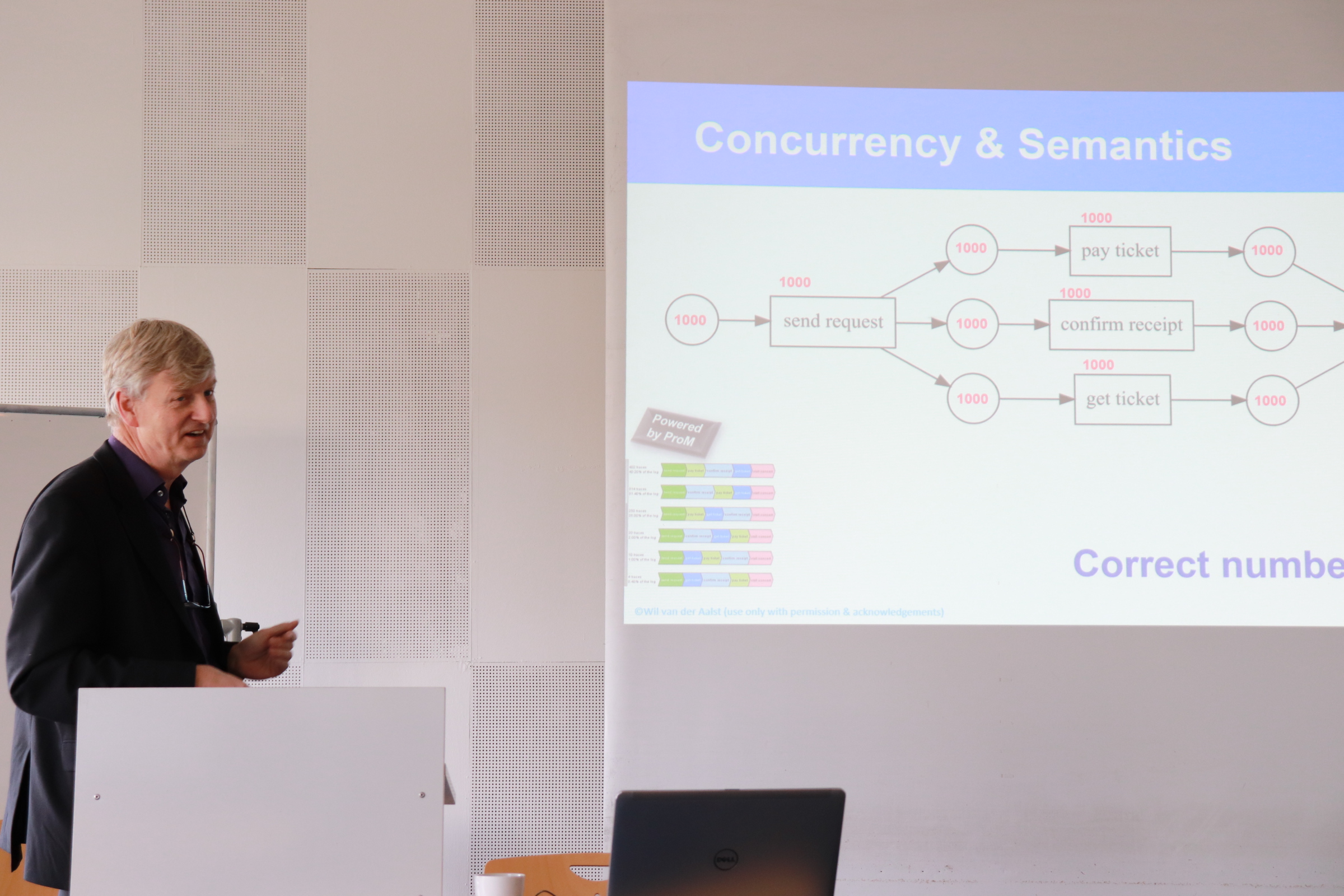 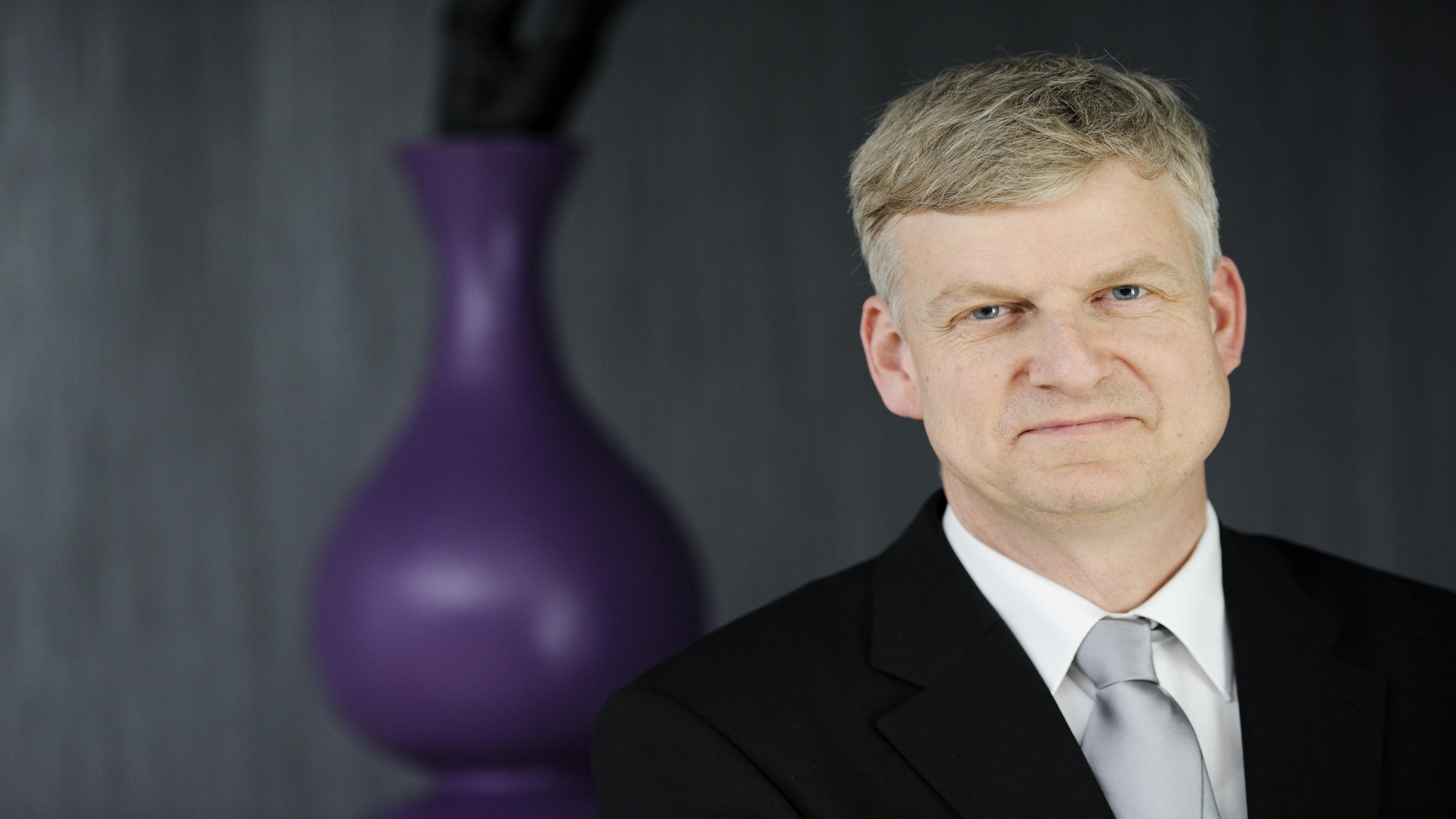 Prof.dr.ir. Wil van der Aalst from Technische Universiteit Eindhoven (TU/e) was visiting the SDA group on the 29th of November 2017.

Prof.dr.ir. Wil van der Aalst is a distinguished university professor at the Technische Universiteit Eindhoven (TU/e) where he is also the scientific director of the Data Science Center Eindhoven (DSC/e). Since 2003 he holds a part-time position at Queensland University of Technology (QUT). Currently, he is also a visiting researcher at Fondazione Bruno Kessler (FBK) in Trento and a member of the Board of Governors of Tilburg University. His personal research interests include process mining, Petri nets, business process management, workflow management, process modeling, and process analysis. Wil van der Aalst has published over 200 journal papers, 20 books (as author or editor), 450 refereed conference/workshop publications, and 65 book chapters. Many of his papers are highly cited (he one of the most cited computer scientists in the world; according to Google Scholar, he has an H-index of 135 and has been cited 80,000 times) and his ideas have influenced researchers, software developers, and standardization committees working on process support. Next to serving on the editorial boards of over 10 scientific journals he is also playing an advisory role for several companies, including Fluxicon, Celonis, and ProcessGold. Van der Aalst received honorary degrees from the Moscow Higher School of Economics (Prof. h.c.), Tsinghua University, and Hasselt University (Dr. h.c.). He is also an elected member of the Royal Netherlands Academy of Arts and Sciences, the Royal Holland Society of Sciences and Humanities, and the Academy of Europe. Recently, he was awarded with a Humboldt Professorship, Germany’s most valuable research award (five million euros), and will move to RWTH Aachen University at the beginning of 2018.

Prof. Jens Lehmann invited the speaker to the bi-weekly “SDA colloquium presentations”. 40-50 researchers and students from SDA attended. The goal of his visit was to exchange experience and ideas on semantic web techniques specialized for process mining, including process modeling, classifications algorithms and many more. Apart from presenting various use cases where process mining has helped scientists to get useful insights from row data, Prof.dr.ir. Wil van der Aalst shared with our group future research problems and challenges related to this research area and gave a talk on “Learning Hybrid Process Models from Events: Process Mining for the Real World (Slides)”

Abstract: Process mining provides new ways to utilize the abundance of event data in our society. This emerging scientific discipline can be viewed as a bridge between data science and process science: It is both data-driven and process-centric. Process mining provides a novel set of techniques to discover the real processes. These discovery techniques return process models that are either formal (precisely describing the possible behaviors) or informal (merely a “picture” not allowing for any form of formal reasoning). Formal models are able to classify traces (i.e., sequences of events) as fitting or non-fitting. Most process mining approaches described in the literature produce such models. This is in stark contrast with the over 25 available commercial process mining tools that only discover informal process models that remain deliberately vague on the precise set of possible traces. There are two main reasons why vendors resort to such models: scalability and simplicity.

In this talk, prof. Van der Aalst will propose to combine the best of both worlds: discovering hybrid process models that have formal and informal elements. The discovered models allow for formal reasoning, but also reveal information that cannot be captured in mainstream formal models. A novel discovery algorithm returning hybrid Petri nets has been implemented in ProM and will serve as an example for the next wave of commercial process mining tools. Prof. Van der Aalst will also elaborate on his collaboration with industry. His research group at TU/e applied process mining in over 150 organizations, developed the open-source tool ProM, and influenced the 20+ commercial process mining tools available today.

During the meeting, SDA core research topics and main research projects were presented and try to find an intersection on the future collaborations with Prof. Van der Aalst  and his research group.

As an outcome of this visit, we expect to strengthen our research collaboration networks with TU/e and in the future with RWTH Aachen University, mainly on combining semantic knowledge and distributed computing and analytics.